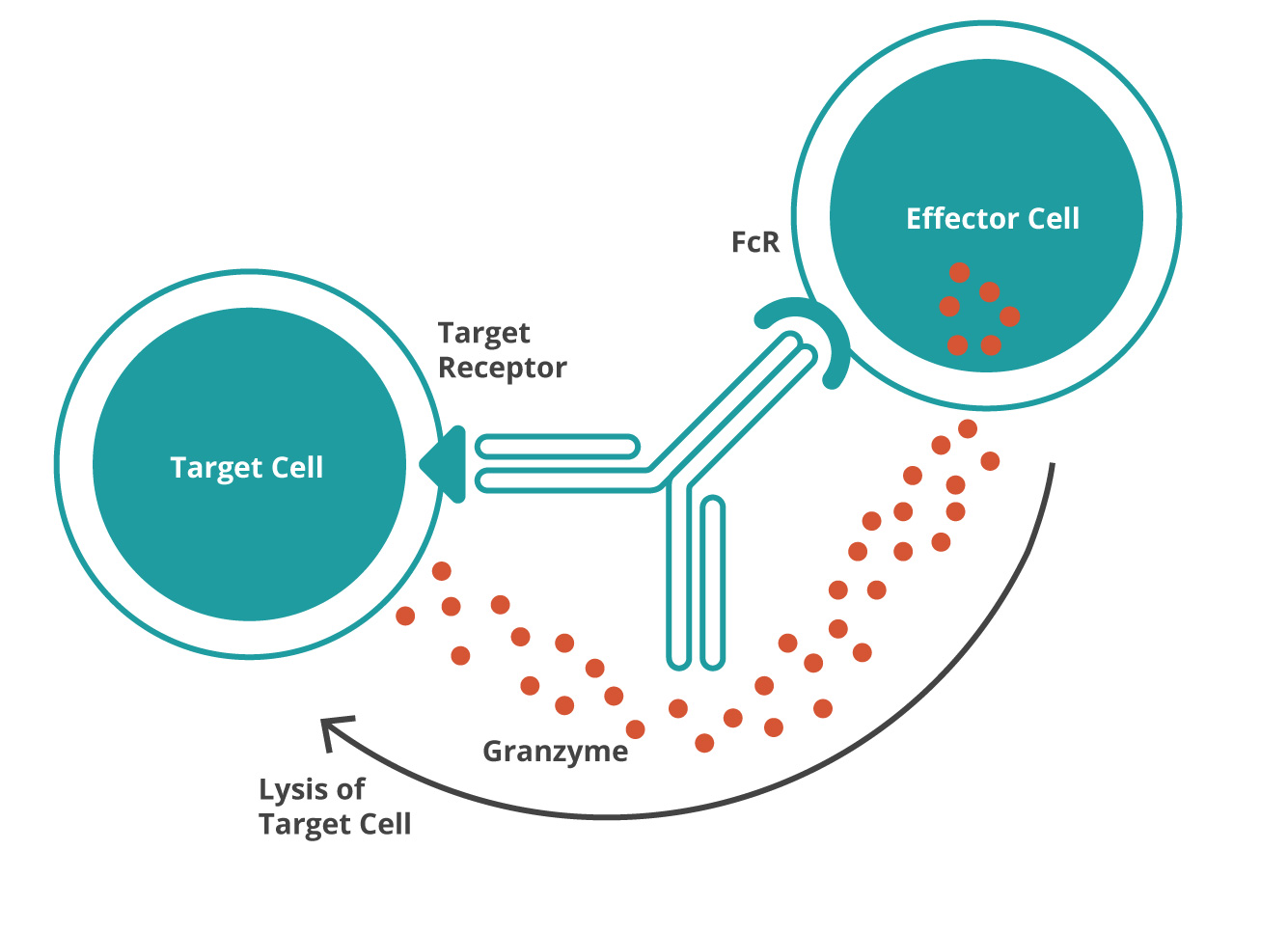 Antibody dependent cellular cytotoxicity (ADCC) is a mechanism in host immune defense where antibodies bind to an antigen on the surface of a cell, targeting that cell for killing by an immune effector cell, such as a Natural Killer Cell (NK cell). The effector cell “recognizes” the antibody bound cell by binding to the antibody via the Fc gamma receptor (FcγR) and uses a variety of methods to kill the target cell. With the advent of monoclonal antibody therapies and other biotherapeutics containing Fc regions derived from antibodies, it is possible that these biotherapeutics will induce ADCC. In the case of a monoclonal antibody targeting a tumor cell, ADCC would be a desired outcome, leading to tumor death. However, for biotherapeutics whose MOA does not involve depletion of target cells, ADCC is not a desirable outcome. To best predict the body’s response to a potential biotherapeutic, in vitro ADCC assays need to be performed prior to use in the clinic. While multiple immune cells including neutrophils, macrophages, and NK cells express FcRs, NK cells are the principal effector cells in ADCC. The binding of FcγR to the Fc domain of  the biotherapeutic on the target cell induces receptor crosslinking, leading to the release of perforins and granzymes from the NK cells. Their release results in lysis of the target cell. Therefore, the ability of a biotherapeutic to induce ADCC activity can be measured by target cell lysis. Commonly used methods to measure target cell lysis include both flow cytometry which measures fluorescently labeled target cells or spectrophotometry which measures radioactive labels (51Cr) or endogenous enzymes released by the target cell (LDH).

Oftentimes, to characterize the ADCC activity of a biotherapeutic, healthy donor peripheral blood mononuclear cells (PBMCs) containing NK cells are used since this best represents the physiological setting. However, to establish a potency assay that measures the ADCC of a biotherapeutic where precision and accuracy is needed, it is possible to use an NK cell line as effector cells in the assay. To increase the sensitivity and assay window of the ADCC assay, the ratio of effector (NK cells) to target cells can be increased. Similar to ADCC, complement dependant cytotoxicity (CDC) is a mechanism of host defense in which antibodies can induce target cell lysis by activating the immune system. However, while immune cells are activated to induce lysis in ADCC, the complement system is activated to induce lysis in CDC. The complement system consists of 20 small proteins that are all synthesized by different cell and tissue types. CDC is initiated when C1q protein binds to the Fc region of an antibody-opsonized (coated) cell. Binding of C1q in turn leads to C1 complex formation that eventually results in the formation of the complement membrane attack complex (MAC) which forms pores in the cell membrane leading to lysis of the cell.

Cancer therapies have harnessed this pathway to induce tumor cell lysis. Biotherapeutics directed against tumor cells will bind to the tumor cell leading to opsonization. The Fc region of the biotherapeutic complexed to the tumor cell can then engage C1q, leading to activation of the complement pathway. Therefore in drug development, it is important to characterize if a biotherapeutic can induce CDC activity. Commonly used in vitro CDC assays utilize either human serum or purified human complement and mix them with the target cells that are opsonized with the biotherapeutic. After incubation, the CDC activity is determined by measuring target cell lysis. Target cell lysis can be measured by several readouts. Classical CDC assay measured  the release of a radioactive compound that was preloaded into the target cells. However, newer methods have been developed that measure the release of intracellular components such as ATP with a luminescent detection system.

BioAgilytix provides biomarker, immunogenicity, cell-based assay, and other laboratory services for pharma and biotech companies around the world. We are a leader in immunogenicity testing, an important step in drug development, evaluating anti-drug antibodies prior to treatment, and analyzing drug efficacy in a patient over time. Contact BioAgilytix today with any questions or requests.